I’m guessing that you would like to learn about indented natural diamond inclusions? Good news, you’ve come to the right place. Not only will you learn the basics about what the hell they are, you might even crack a smile while doing so. But before we get to the fun stuff, have you read our snazzy introductory article on diamond inclusions? I suggest you click here and catch up on how to spot inclusions in general.

What is an Indented Natural?

So, Indented Naturals; strange name - kinda cool inclusion! First things first here folks, an indented natural is not really a blemish or a flaw. It’s simply the leftovers from what the diamond looked like before it was cut and polished up! To put it another way, it’s just a tiny bit of the diamond still in its rough state. Think of it as a whisper of the stone’s original skin before it became a Rockstar.

Here’s a handy example for you to feast your eyes on: 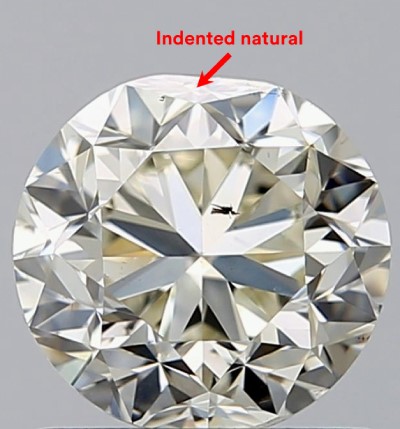 Indented naturals typically occur when a teeny tiny portion of the surface of the rough diamond is recessed, or ‘depressed’ into the surface of the stone. When a diamond cutter begins to transform the ugly duckling rough stone into a swan, they often find that they cannot remove the indent without re-cutting and therefore significantly reducing the size of the whole diamond.

If the indent is very small, and there is only one of them, they will usually just leave it there.

Whether or not these indented naturals are harmful to the stone, depends on where they are, how big they are, and how many of them there are. If it’s only one very tiny indent, it’s not going to be harmful to the stone, and it also won’t affect its durability. What you want to look out for though, is more than one indented inclusion, or one that looks fairly large. .

To sum up, as long as the indented natural inclusion is not too big/numerous, and has been given the all-clear by a certified gemologist, then it can be a pretty cool reminder of the journey the stone has taken before it landed on that finger.