Tune In To The Channel Setting Ring Guide | Rare Carat

Today we’ve decided to dive into one of the most popular diamond engagement ring settings, the channel setting. Buckle up Baby, because things are about to get INFORMATIVE. 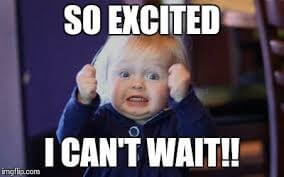 So, what the heck is a channel set diamond engagement ring? Simply put, a channel set ring has a little groove carved into the band of the ring itself. This particular groove is not to be mistaken with Madonna’s groove, which you can find by clicking here. Inside this groove you’ll find a series of identical diamonds, which have been slotted tightly inside. Take a look at this stunning example, which of course I want to own immediately: 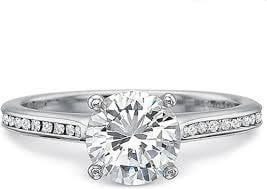 Those Diamonds Look Snuggly AF Inside That Groove

The number (and shape) of these little diamonds can and do vary widely. Above we have an example of some identical round diamonds, which look to be wrapped around approximately three quarters of the way around the band itself. You might only have three or four diamonds on either side, or they might be square (i.e. ‘princess cut’) instead of round. Basically, the possibilities are endless.

One thing that peeps often get confused about, is the difference between channel set’ rings and ‘pavé set’ rings. It’s understandable, as to the untrained eye they do look very similar, but believe us when we tell you that there are some small but important differences. The major difference between these two settings, is the amount of metal left visible. In a channel setting, the only metal you can see is the metal on either side of the groove. You cannot see the metal underneath (or indeed between) the diamonds. With a pavé setting things are a little different, because the metal of the ring itself is much more visible due to its prong setting. If you take a look at the two images below, you can see that the metal prongs from the ring itself are protruding in between each of the tiny diamonds in the pavé example, a very different look from that of the channel setting: 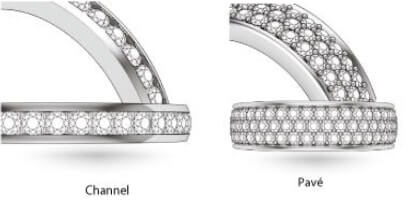 It’s not just the way the diamonds sit in the setting that are different however. The size of the diamonds used in each setting can also be very different. For instance, in a channel set diamond ring the stones around the band tend to be larger than those used in a pavé setting. These smaller pavé set diamonds do sparkle like the sun (because there are more of them), but are also much more susceptible to popping out as they are fixed only with teeny little prongs (unlike channel set stones which are fixed in there very snuggly). Interested in learning more about pavé set diamond engagement rings? Click here and read our article all about them! Couldn’t care less about them, and instead want to know the major pros and cons of channel set diamond engagement rings? ABSOLUTELY! Read on.

Let’s begin with the what I think is the biggest upside of choosing a channel setting; the versatility! That’s right, channel set diamond rings are the chameleons of the ring world. You can go for the classic round channel set diamonds, which will mean there are tiny little spaces in between each stone (see below left), OR you can go with diamond shapes that will slot easily in next to each other like pieces of a puzzle, such as emerald cut/princess cut etc. (see below right): 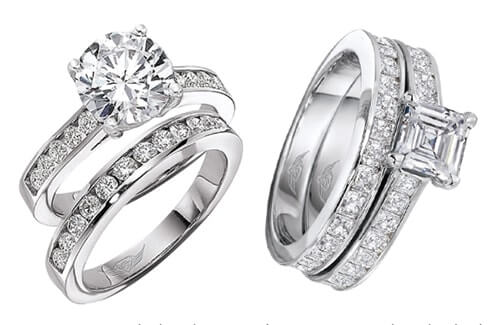 And you are certainly not limited to just different diamond shapes. Nope, you can also add a bespoke touch to your ring setting by changing up the number of diamonds you use, and even the width of the band itself! You could decide to keep it simple with only three or four diamonds on each side, or you could go with a half/three quarter (or even full) channel set band. Word of warning on the full channel setting though (i.e. diamonds around the entire band) – these are a niiiightmare to keep from damage and a total pain in the @ss to repair and resize, so please do keep that in mind. Overall however, choosing a channel set diamond ring means choosing a style that is pretty much able to transform into any look you so desire, depending on how many hours you’ve spent in a Pinterest rabbit hole. Ladies and Gents, you need not bother pretending you don’t know what I’m talking about here.

Another major tick for our darling channel set rings is the fact that they are uber safe. No, they cannot make sure you get home safely from the club, but they do offer a lot in the way protection for those precious little diamonds. This is all due to the snazzy little groove in which they sit:

As you can see in the image above, the groove allows the diamonds to rest safely inside the band itself, while the little lips of metal on either side add an extra element of protection. This lip/groove situation means that the diamonds along the channel are not exposed directly to any unfortunate run-ins with walls/car doors/bathroom tiles (and all other common things that we tend to bump our hands against). They suffer far less damage than their daredevil drama-loving cousins the pavé setting for instance, because those little babies insist on sitting right our there ready for a thrashing by the world around them. A channel set ring will always be a better option for those of you want all the bling of a diamond band, with none of the drama.

Speaking of bling, this is a pretty obvious perk to the channel setting… SPARKLE. What’s better than a stunning solitaire diamond engagement ring? A stunning solitaire diamond engagement ring with a channel set band. A channel set band works wonders, because it really highlights your center diamond (or indeed center stone if it's not a diamond). No matter what type of channel setting you choose you can be sure that it will add that extra wow factor by blinding your frenemies and rendering them powerless against the beauty of your ring. You’re welcome.

Certainly Not the Aim of the Ring... But Maybe a Small Perk?

OK, OK. We’ve discussed the upsides, it’s time to face the music and take a peek at the downsides of channel set diamond rings. At the top of my list would be the issue of resizing/repairing. It is a hard fact of life that finger sizes change over time. And of course what I mean by that is, in my case at least, I got fat. Don’t get me wrong, I’m gorgeous and I know it too, but my fingers have gotten just a liiiiiitle chubbier in the last year or two. My ring still fits, but I can feel it is a little snug (it’s literally cutting off circulation to my finger but whatever). It has crossed my mind to get it resized half a size up, just so that I get to feel svelte once again (until I hit a hard weekend of guzzling sugar, then I’m back to square one). The problem is that I have a half channel set band, so I am seriously worried that the resizing will cause my ring to fall apart like an old car…

Resizing or even repairing a channel set diamond ring is risky (even if you only have diamonds around half the band like mine) because any alterations to the band itself may result in the loosening of the diamonds (that have been sitting snuggly inside their groove up until now). You will defo need to find a highly skilled jeweler to help you with any alterations you wish to undertake, ya hear me? We do NOT need any bent/crooked channels. It also stands to reason that this advice applies to channel set wedding rings/wedding bands too. Avoid the full channel set ring, avoid the stress.

Your Channel Set Band After a Dodgy Resizing

It’s not just keeping things tight that you need to worry about with channel settings though. Keeping things clean can also be a chore. It doesn’t take a degree in physics to appreciate the fact that it would be pretty darn tricky to clean inside those grooves. Dirt, grime and general grossness will and does get trapped in between and underneath those baby diamonds, leaving them looking lackluster and dreary AF. The problem gets even more pronounced if you have opted for round diamonds in the channel, because there are simply more crevasses in which the dirt can hide from you… 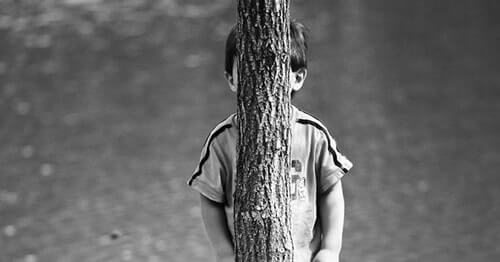 Not Fooling Anyone There, Sam

Now, this does not mean you must abandon all hope of having a ring that is clean as a whistle. Are whistles really clean though? Who cares, let’s move on. Just a little bit of extra effort is all it will take for you to keep that ring even cleaner than a whistle, because if you think of it for even two damn seconds you will realize that whistles are gross. All you need to do is grab an old tooth brush, some warm soapy water and start GENTLY scrubbing it, making sure you get right up underneath the band with the bristles. We suggest avoiding those fancy shmancy ultrasonic cleaners at the jewelers as they have a tendency to loosen the stones with all that crazy vibrating. If you want to know more about the ins and outs of keeping a diamond ring clean, read our insightful yet hilarious post right here.

The very last negative thing I will say about channel set diamond engagement rings before I run off into the sunset is this; the visibility of the stones can sometimes be less than ideal. What do I mean by this? OK let’s think about it for a second. Diamonds need light. They thrive on light. Light makes diamonds come alive. So the more light they can pull in, the more brilliant they will look. With me so far? Of course you are, it ain’t rocket science. The issue with channel set engagement rings (especially if the underside of the band is also covered over), is that the channel wall grooves and lips that we love so very much for their safety characteristics, we must curse for their light blocking tendencies. The diamonds (no matter what size/shape/quality) will always be at least partially covered by the metal used to secure them in place. Now don’t get me wrong, they will not look lifeless by any stretch, but if you are looking for a super brilliantly blinding band, be aware that channeled diamond settings will sparkle just a little less than their live-for-drama prong set pavé cousins. It won’t matter tooooo much with round stones, but you really will need to take a look at how a princess cut diamond channel set ring performs IRL before you commit to the setting.

All of that said though, if you fancy a ring setting that has lots of small diamonds and a modern look, the channel setting is a popular choice in world jam-packed full of choices. This just happens to be a pretty stunning one, don't you think? 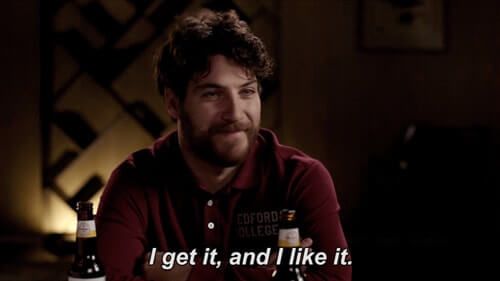 He Gets It, And He Likes It.