Diamond Inclusions: Bruised, But Not Broken

What is a Bruise on a Diamond? 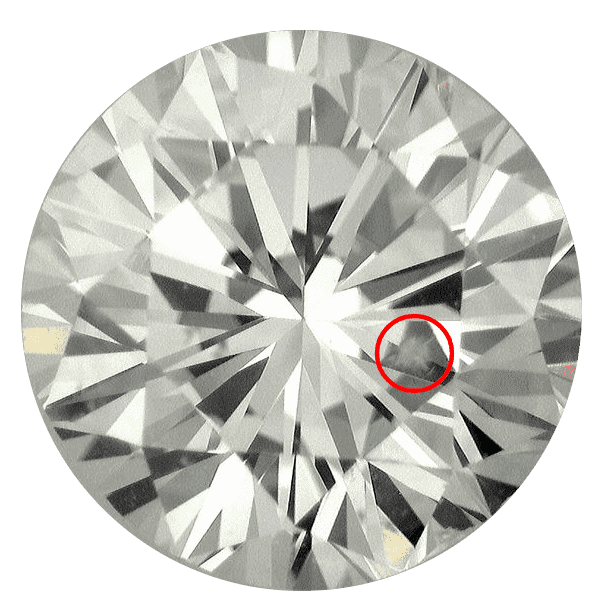 When it comes to diamond inclusions, a ‘bruise’ is a fairly easy one to understand. Simply put a bruise is a teeny tiny area of impact on the stone. These bruises can happen if diamond rings are mishandled while being stored together, such as inside your jewelry box at home.

The result of this diamond bashing (not to be confused with peeps who talk smack about diamonds) can look very similar to a windshield that’s had an impact from a rock. See how the point of impact stretches out with these fractures or splinters of cracks? That’s what a bruise looks like on a diamond. I admit that this looks sort of extreme, BUT FEAR NOT! The vast majority of them are absolutely tiny.

Bruises are not the most common of inclusions, but you do want to have a good look at that grading certificate in order to ascertain if there are any on your potential forever stone.

Diamond bruise as represented by GIA

If the clarity grade is VS1 or above, but the grading report states that the diamond has a bruise, you need not worry about it - it will be impossible to spot and won’t have any major impact on the integrity of the stone either.

If the diamond in question is on the lower end of the clarity grade spectrum then be sure to ask if it can be hidden by the ring setting or if it is likely to turn into a bigger fracture in the future.

Dr. Rian Mulcahy
Rian is officially a Diamond PhD - just ping us if you’d like to read her fascinating 200-page thesis, titled Facets of Value: An Investigation into the Formation of Worth in the Diamond Market. She has consulted various firms all along the pipeline, from the rough diamond market to the recycled diamond industry. She holds an MA in Globalisation and Development from University College Cork and a PhD in the Sociology of Diamond Valuation from the London School of Economics.
Get in touch
Chat Now - Gemologists Online(855) 720-4858help@rarecarat.com311 W 43rd St, New York NY 100362000 Town Center, Southfield MI 48075
Sell on Rare Carat
Why Rare Carat?
100% Money Back GuaranteeUnbiased Gemologist InputAI Price & Quality Check Free Insured ShippingFree 30-Day Returns & ResizingLaser Inscription VerificationDiamond Price Matching
About us
ReviewsOur MissionTeamBlog
GuaranteeFAQEducationDiscount Codes
Popular Searches
© Sat May 21 2022 08:50:36 GMT+0000 (Coordinated Universal Time) Rare Carat
Privacy Policy | Terms of Service | Accessibility | Sitemap