Natural as represented on GIA report

What is a Natural on a Diamond?

I don’t actually like classifying naturals as blemishes. That’s because naturals, unlike certain other blemishes – I’m looking at you ‘burn marks’ - are not the result of sloppy workmanship on the part of a diamond cutter, or the careless handling of the stone by other people. Naturals are actually just teeny tiny bits of the original ‘skin’ of the diamond from when it was in it’s rough form (i.e. before being polished up). 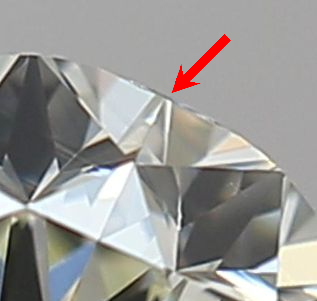 This natural is very large and although it would throw off symmetry, it doesn't enter the realm of clarity. Maybe skip this one.

Not to be confused with ‘indented naturals’, as those tend to creep further up on to the crown of the diamond, or nestle down into the stone itself. Simple ‘naturals’ in the form of blemishes on the other hand, keep their hands to themselves and stick to the area around the girdle (FYI that’s the thin perimeter of the stone).

Naturals are not going to ruin your diamond, and will not impact the integrity of the stone (i.e. make it weak or subject to breakages). If you have shortlisted a diamond that has a natural, just know that naturals (just like most blemishes in fact) can actually be removed by re-polishing the stone. This will mean that;

A. You will have to incur the cost of that re-polish, so find out how much it will cost.

B. The weight of the diamond will go down as you are essentially ‘shaving’ some away in order to get rid of that blemish.