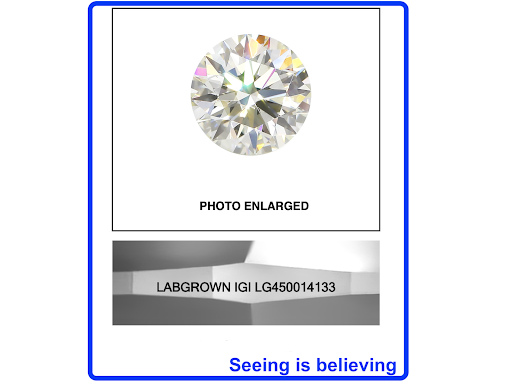 I mean, let’s get real for a second. Even if you’ve read every single one my articles here on Rare Carat, you’d still struggle to tell the difference if three diamonds of exactly the same carat, color and quality were put in front of you.

So how can we get around this little spot-the-difference conundrum? Identifying symbols. And just like attaching labels with your name on them can help you to identify what's yours, the process of engraving diamonds works exactly the same way.

By engraving a grading report number on the diamond itself, it can always be easily identified, even next to diamonds that look identical.

Essentially this diamond laser engraving (also known as diamond laser inscription) is done by pointing a teeny tiny laser beam on the thin outside perimeter of the diamond (on the area commonly called the girdle). As the laser beam interacts with the carbon of the diamond it turns the area it touches black, leaving the desired number/letter combinations visible. Now, this is not to say that you can read the laser inscription with your naked eyes!

You would need at least 10x magnification via a jeweler’s diamond loupe/microscope (sometimes even 20x magnification) in order to spot the markings, meaning your diamond looks exactly the same! What’s really cool about these inscriptions, is that they are designed to link with the grading report attached to the stone (from the laboratory that graded the stone, e.g. GIA), and so the numbers/letters on the certificate matches perfectly the numbers/letters on the stone itself. Just as an example, have a look at this GIA laser inscription (which is on the diamond’s girdle).

The corresponding combination of letters and numbers will then be found on your diamond grading report, similar to this: 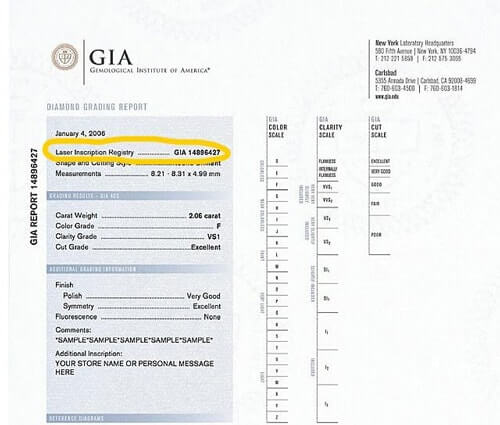 And just like that, you have a simple and foolproof way of verifying that the stone you have on your finger is the exact one outlined in that all-important diamond grading certificate! But why would you want to do this? Let’s take a look at a number of scenarios where a laser inscription is helpful.

When Are Laser Inscriptions Useful?

Diamond merchants, retailers and even manufacturers (being the busy bees that they are), are handling huge volumes of almost identical stones every day. These diamonds often vary so slightly that they simply don’t have the time to be individually evaluating each loose diamond every time they would like to buy/sell one. In essence then, the laser inscription system is a great way for peeps in the diamond biz to be able keep their stock in check without getting all those sparklers mixed up!

They are also incredibly useful for consumers. Now, in order to explain the sensitive ins ‘n outs of what I’m about to say, let’s take a minute to identify the two different type of mistakes. On one side of the ‘mistake’ camp (let’s call this ‘mistake type one’), you have those honest humbling mistakes where you wish the ground would swallow you up as you have made such an epic tool of yourself. Kind of like the time my husband congratulated his female colleague on her pregnancy, only to be softly told that she was, in fact, not pregnant. Honest, albeit idiotic mistake.

Then there is ‘mistake type two’. These are not so honest. Kind of like that time when I was 19 and I went to a raging party the night before I was supposed to work at my weekend job, and so I just didn’t turn up and told them I had merely made a ‘mistake’ when jotting down my hours. I had not. Got it? Great.

Now that we have cleared up those two types of mistakes, let’s apply them to a few diamond related scenarios.

Now, with the innocent type one mistake, things may happen like the following; let’s say you have dropped a ring in to be resized. In order to resize the gold band/platinum band, the jeweler will need to pop that diamond out of the ring setting. Unfortunately what can happen here, is that your stone may quite easily be confused with another while in the midst of the technical work being carried out, leaving you with someone else’s diamond back in your setting. This has happened, many times. This is an absolutely honest mistake, but one that can easily be avoided with a handy identification system such as a diamond laser inscription. Simply bring your diamond certificate with you and ask the jeweler to make sure the inscriptions match! Awkward mistake avoided!

And of course, the laser inscription is also very handy indeed in avoiding the more nefarious of ‘mistakes’ too.

Having worked and conducted research in the diamond industry for many years, I can attest to some pretty horrific fraud/scam situations out there (fortunately these are few and far between, but they do happen). There have been situations where someone will drop their diamond in to be appraised, only to find out YEARS LATER that the diamond was actually swapped out for a cubic zirconia. HORROR.

Another little trick that’s been done before, is what I like to call the old switcheroo. A couple will come in and look at a stunning diamond. They will fall in love. They will put a deposit down on the stone, and eagerly come back to collect it in a few weeks, once the ring has been set. The problem is, that at this stage the (not so honest) retailer has actually set the ring with diamond of slightly lesser quality (maybe two colors lower in quality, or a few clarity grades down).

The couple, who are not damn gemologists (nor do they need to be) will be none the wiser as to the subtle differences in the stones, and therefore will pay the price of the better stone but receive the worse one. It’s rare folks, but it does happen. To avoid this wolf-in-sheep’s-clothing scenario, having a corresponding diamond laser inscription number means that you can be sure the diamond you fell in love with is the diamond you go home with.

Personalized Just For You

The final (and don’t worry, far less depressing) reason why diamond inscriptions are useful, is because they can offer an excellent way to personalize your diamond even further! Yup, that’s right, lasers ain’t just for serial numbers (or cats). You can also get personalized details engraved onto the girdle of the diamond if you wish! You can customize your stone with romantic or secret little messages.

You could even engrave the proposal date or wedding date on that baby! CUTE. Word of warning though, keep it short and sweet – a girdle is not so big, guys! You might need to alter your message to something smaller also, if the jeweler thinks that the girdle is too thin to hold your message.

The only limitations here are the girdle size and the depth of your creativity. And don’t listen to those party poopers who say that a personalized laser inscription can lower the value of the stone. It is incredibly easy to buff out the inscription if needed, and not overly expensive either! Go for it.

Remember, if you fall in love with a diamond in-store, make sure to take down the details of the laser inscription, so that you can come back and look at that EXACT stone again. And don’t be afraid to interrogate that inscription yourself under the diamond loupe!

Similarly, if you bring your diamond ring to be repaired, don’t forget to tell them about the laser inscription, so that they can use it to easily identify your stone! It will also be helpful for them to know that it’s there simply so that they don’t damage it by mistake.

If you decide to go for a personalized message, keep it short and sweet. No soliloquies please, Shakespeare! That said don’t be afraid to get creative with your engraving… you can even get tiny symbols or sketches lasered on these days! Make sure that your personalized engravings can be easily removed by a professional diamond cutter without damaging the integrity of the diamond (such as reducing its carat weight too much) BEFORE you take the plunge and get them done…. Just in case.

Finally, I would also suggest that you think about the final ring setting before you have the stone engraved. It would be rather pointless if you spent time and effort (and dollars) getting a beautiful, customized laser engraving (or even just a simple serial number) put on the girdle of your diamond, only for it to be hidden with the ring setting. Try to have the diamond set in such a way that the engraving is potentially easy to see (under magnification), and not hidden with a clunky piece of metal.

There are quite a few diamond grading labs out there, and most add laser inscriptions to the girdle of the diamonds they grade. You can check an inscription on all of their websites. Keep in mind, there are some inscriptions that aren't from a grading lab at all. Some diamond companies will inscribe a stock number onto the girdle to keep better track of their inventory. Since those numbers are for internal use only, it's nearly impossible to know where they came from or what they mean. Here are links to check the most often used grading labs.

And there you have it folks, the ins and outs of diamond inscriptions.