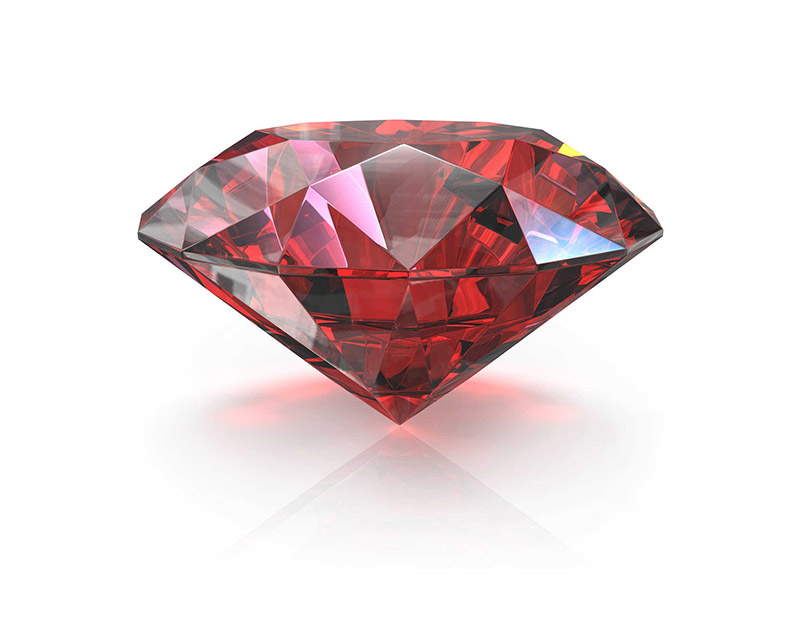 After the closure of Australia’s Argyle mine at the end of last year, one of the best stories that emerged in the industry press was recounted by veteran of the mine, Reid Mackie.

The story unfolds in a luxury hotel penthouse at the first press event of the 2014 tender of their coloured pink diamonds. The Argyle Cardinal, a 1.21 ct red diamond was ready for its close up. As the photo was about to be taken, it does what diamonds do so well, it ‘pinged’.

Remarkably, this little diamond, less than 1cm across, was found, but resting on the extremely thin ledge at the point where the all-glass floor met the all-glass windows before descending into the bowels of the building. How was it salvaged? A lump of blu tac on a ruler. Genius.

But what if the worst had happened? Say that little red diamond had bounced into oblivion, as if it had vanished back into the earth from which it came, beyond the scope of any patron saint, or that bright eyed optimistic ‘who is sure that it will turn up’? Well, that would put the less than 30 known recorded red diamonds (from the billions and billions mined over the years) down to 29.

The red diamond is indisputably the rarest of the colours. And they are set to get rarer. Since the majority of these amazing gemstones came from the aforementioned Argyle mine. And the funny thing is, it is not really until the mine started operating in the 1980s, that they - indeed all coloured diamonds - became a ‘thing’. I was told once by a London based diamond cutter that ‘back in the good old days’, which by estimation would be the 60s, if the diamond wasn’t white it was sh***. And it would be put aside for industrial use.

Then the Australians discovered that although they were pulling buckets of diamonds out of the ground (total production from 1983 to their closing last year, in November 2020 was 865m carats, and at its height, 90% of world's production) - but a lot of them were kinda brown. Enter an astute marketing mind, and these browns became ‘champagne’ and ‘cognac’ diamonds, and they flew off the shelves.

So, when a rancher from Montana put his red diamond up for sale in 1987, the idea of a fancy coloured diamond had been excited in the mind of the consumer - and Mr Warren Hancock’s stone sold for $880,000 dollars. The Hancock red, at the time, became the most expensive gemstone ever sold. The trend was set. You’d be handing over a lot more now.

But It Isn’t All the Attention That Makes Them Blush

The colour is due to the diamond structure, at an atomic level, slipping. This only happens if the crystal is placed in an environment of high stress and pressure. Most known pink and red diamonds are found in areas in the earth where mountains formed millennia ago. Now, if I were a diamond stuck between two massive colliding lumps of rock, I would find that stressful. And would doubtless end up a little red in the face.

Why Are They So Rare?

It is a question of semantics, really. There are a fair few variables of red out there - pinkish reds, orangey reds, brownish reds etc. (I say a fair few, but we are still talking a tiny figure. The coloured pink diamond quota coming out of Argyle, for instance, accounted for 0.13% of their total production. That’s a handful. Literally. That’s it.) But it is the ‘predominantly red’ predicate that sets these diamonds apart.

Quick run down. Colour in diamonds is assessed by hue, tone and saturation. The hue is the ‘spectral colour’. So, anything a rainbow can produce, if you like. Red Orange Yellow Green Blue or Violet.

But that only gets us half way there.

Once the hue is established, quality is then determined by deciding the tone (how light or how dark) and then the saturation (how intense) the chosen hue is.

The colour is then categorised as one of the following grades, Fancy Light, (worthy of note here is that a fancy light red diamond is, in fact, pink....) Fancy, Fancy Dark, Fancy Deep, Fancy Intense, and Fancy Vivid, with the last of them bringing in the big bucks. But a Fancy Red, with its colour sitting there in the middle is, as Goldilocks would say, ‘just right’. Its a nod to mother nature that all the predominantly red diamonds she has offered us are not recognised as anything above Fancy Red - because Red, in itself, is about as vivid and intense a colour as they come anyway. We don't want to sound demanding.

So, there we have it, the rarest of the rare - that Fancy Red. The type that almost ended up falling through a crack in the sideboards.

Beth West
Beth is the Brit amongst us and a bonafide diamond geek. She is a Fellow and Diamond Fellow of the Gemmological Association of Great Britain, and even has an award to prove her dedication to the subject (Bruton Medal for being the stand out Diamond Diploma candidate). On top of writing for RareCarat, she busies herself with numerous other diamond related projects, including teaching for the Association, but scribbling for us is by far her favorite pastime. Above diamonds, she loves her cats (and her daughter and husband too, obvs).
Get in touch
Chat Now - Gemologists Online(855) 720-4858help@rarecarat.com
Rare Carat
20 W 47th St, New York, NY 100362000 Town Center, Southfield MI 48075
Why Rare Carat?
100% Money Back GuaranteeUnbiased Gemologist InputAI Price & Quality Check Free Insured ShippingFree 30-Day Returns and 90-Day ResizingLaser Inscription VerificationDiamond Price Matching
About us
ReviewsOur MissionGuaranteeDiscount CodesFAQPoliciesSell on Rare Carat
Learn More
Diamonds 101Lab vs Natural DiamondsDiamond TrendsAll EducationBlogTake the QuizEngagement Rings
Popular Searches
© Fri Jan 27 2023 07:35:29 GMT+0000 (Coordinated Universal Time) Rare Carat
Privacy Policy | Terms of Service | Accessibility | Sitemap