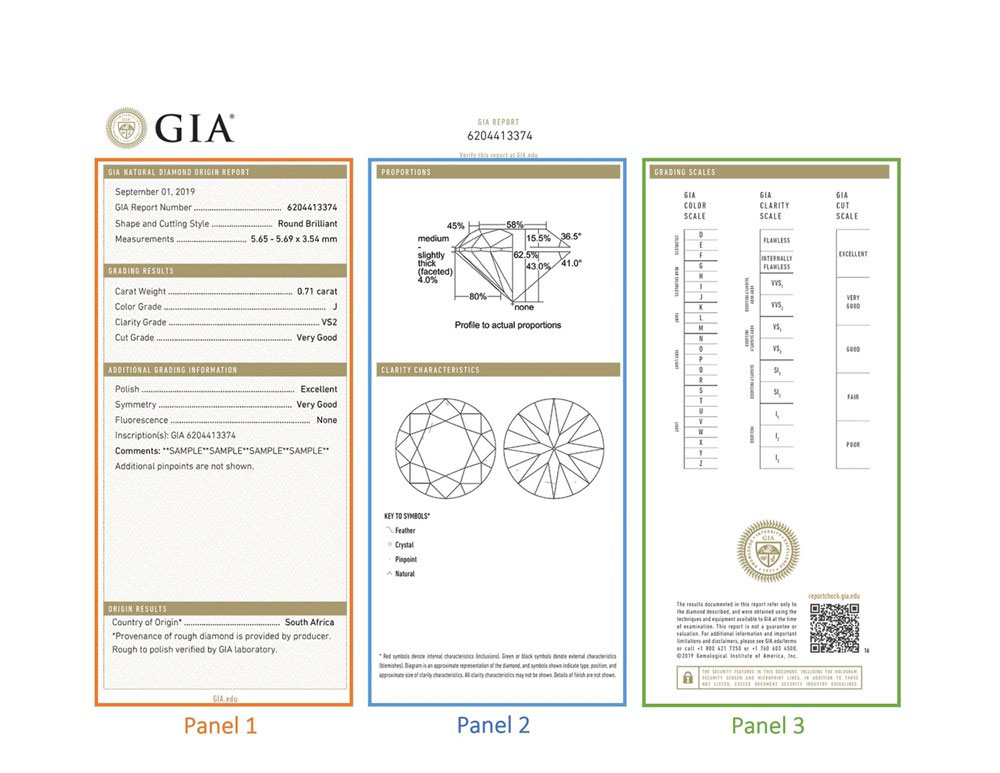 There is a short answer and a long fascinating story to this question.

The GIA diamond report is the most technologically advanced, unbiased, and accurate diamond report out there. The standards GIA created have become the industry gold standard. The grading process GIA invented has been adopted by grading labs and professionals on every corner of the planet.

GIA not only invented the wheel (the 4Cs), but they also created all the tools for making the wheel parts and standardized the wheel making process. Yes, that sounds crazy but that is why the GIA reports are everywhere and why the public and the entire diamond industry rely on them.

The Fascinating Story: Relentless Pursuit for Accuracy and Consistency

Before GIA arrived on the scene, diamond grading and the language around it can best be described as the Wild West: a lawless frontier. Out of the 4Cs (carat weight, color, clarity, and cut), only carat weight was the standard and everything else had multiple sets of loosely defined descriptions. Some of these terms to describe color included: "Top Wesselton" and "Cape" to link color to the geographic origin of where the diamonds were mined. Or as "AA", "AAA", clearly invented by a gemologist who stutters. And others referred to color as "finest white" and "fine white". Clarity was labeled as “without flaws” or “with imperfections.” And cut had a designation of “made well” or “made poorly.” As you can see if you walked into a diamond store back in the day, you would be in for a wild ride and probably came out of the store all dizzy, confused, and very likely swindled.

To standardize the industry and help consumers to make better-informed purchases, one pioneer took it upon himself to revolutionize the entire system. That man was Robert M. Shipley. He popularized the usage of the 4C's as the most important criteria for determining the quality of a diamond. Following in his footsteps and bringing diamond grading into the modern age, was Mr. Shipley's successor, Richard T. Liddicoat. Mr. Liddicoat took the 4C's further by establishing the modern process for grading color and clarity. (*Mr. Liddicoat, for his achievement as a gemologist and president of GIA, has a statue in his honor. Look him up, you will be surprised.)

Under Liddicoat's leadership, diamond color is no longer described with terms but with letters of the alphabet starting with the letter D. Clarity is cleanly separated into FL, IF, VVS 1-2, VS 1-2, SI 1-2, and I 1-2-3. In addition to that, GIA created a system aimed to be as consistent as possible based on the latest scientific findings. To ensure consistency and precision of the grading results, the new system laid out strict requirements for grading. For color, the diamond should be graded under a specific light source against a neutral background. The diamond should be held table-side down and viewed against a set of master stones. Since our color perception is highly dependent on the environment and our physical state, the grading environment is highly controlled to eliminate these influences. A bad day should not mean a poorer color grade.

For clarity, the diamond is viewed with both a 10x loupe and a high-powered microscope. The various inclusions are then plotted on a diagram. Lastly, the diamond is viewed again with a 10x loupe for a final review. The clarity grade is then assigned based on the number, size, relief (contrast with the background), nature (what type of inclusion), and position of the various inclusions.

The Road to Perfect Precision:

Do you think GIA is going to stop at creating a system soundly founded on providing accurate and reliable results? No. They went after human error by inventing and perfecting machines that, combined with gemologists, can do the job with near-perfect precision.

When the diamond is first submitted to GIA, the first step is to take the measurements and proportions of the diamond. All the angles and facets are recorded by an optical laser with, you guessed it, laser precision. Then the diamond color is evaluated. If the diamond is a D-Z stone, a machine is used to give a first opinion on the color. A gemologist double-checks the result for accuracy against the master stones to verify. To determine whether the diamond is natural or lab-created, GIA has invented sophisticated machines to separate the two. One of the more impressive machines can sort melee diamonds (0.005 to 0.25 ct. stones) at a rate of 1800 - 2000 stones per hour separating HPHT, CVD, and natural diamonds and based on the color ranges they fall into. That many diamonds, especially very small, could take me days to sort through.

Perhaps the last frontier, clarity grading is now in the process to be automated by a joint effort to create an AI between GIA and IBM. Are robots taking our jobs? Maybe. But in the meantime, the clarity of a diamond is still graded by two gemologists independently. If they agree on the grade, the diamond receives that grade. If they disagree, the stone is given to a third gemologist for a final decision and settle that diamond debate.

Did I also mention that GIA takes many months to do the basic training for their diamond graders and then tests them continuously to see if they are consistent with the GIA standard? Yeah, the road to perfect consistency and accuracy is that intense.

GIA diamond reports really stand alone as the best, oldest, most uncompromising, and technologically advanced reports out there. So after reading this guide, I hope that instead of asking why buy a diamond with a GIA report you should be asking why would you go without one?