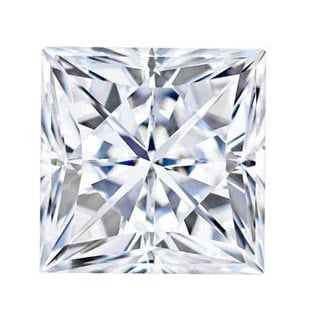 The princess cut diamond ring has to be one of the most familiar diamond cuts, if not just purely based on the name (clever marketing at its finest my friends). I’m pretty sure everyone knows someone who has been obsessed with this style at one point or another. For me it was my best friend… but since she no longer considers herself a princess, she’s moved on to other shapes (did I mention marketing??). Okay I’m joking… kind of… but really this is one of the most popular styles. Simply, a princess cut is a modified square brilliant cut, aka a sparkly square. This cut first officially appeared around 1979ish with popularity reaching its peak throughout the 80s and 90s, and early 2000’s. The princess cut has straight edges, giving it a modern feel, which is really the reason why so many people will continue to choose the princess cut for years to come.

For beginners, like with any diamond (no matter the style), the gem itself will be judged off of the 4 C’s: cut, color, clarity, and carat weight. It’s important for us to understand a little about these when picking out a diamond because it directly reflects the overall quality of the stone, and ultimately how the gem is priced.

The cut of the diamond refers to the proportions, polish and symmetry of the stone after it is finished being cut from the raw material… so basically is it as pretty as it could be?? I think the confusing part is that “princess cut” is talking about the shape of the finished diamond and not its actual cut grade. Important observations when judging any diamond is like a goldilocks situation… a proportionate table face (not too big or too small), neither too deep nor too shallow bottom side, and a middle section that also isn’t too thick or too thin. The proportions and symmetry of a princess cut include these factors but are also judged a little differently than a standard round diamond for the rest of the stone. For instance, specifically to the princess cut, it is fundamental to make sure the sides are even, and it looks like a nice balanced square. Rectangles or uneven sides is definitely not what we want as a beautifully cut princess diamond. 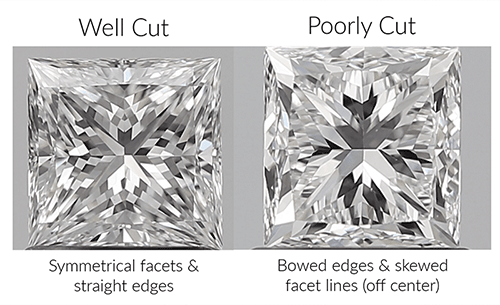 All “colorless” diamonds are graded on the same normal color grading scale, whatever the shape, so that makes it easy. This grading scale ranges from D-Z, with D being colorless and Z being obviously lightly colored. In general, most diamonds show some kind of yellow or brown tint, even if it is super slight. Because truly colorless diamonds are rare, they are easily the most expensive of the normal color range. After Z, diamond colors move into the “fancy color” grading scale, becoming exponentially more expensive (we’ll talk fancy colors another day). The basic breakdown of the normal color scale goes like this…

Realistically, most people won’t be able to see color in their diamond until the K or L grade so being perfect isn’t mandatory here. In fact, intentionally selecting a diamond with a hint of yellow and then pairing it with a gold or yellow gold band creates this warm, classic, romantic feel. Color, or lack there-of, is mostly about preference (or budget) but understanding how the scale works is always beneficial when shopping your options.

Clarity grading of diamonds is also the same across the board, whether it be a princess cut or anything else. I find clarity to often be the most important quality factor when pricing, or buying, diamonds. For the same reason colorless diamonds are pricier, flawless diamonds are (by far) the most expensive. Think about all of the tiny minerals and microscopic sized bits on this planet… now imagine a raw diamond forming deep underground with literally nothing (I mean nothing nothing) getting trapped inside of it. Just straight carbon coming together casually, creating this perfect, natural material. Kind of mind blowing right??! Well… that is a truly flawless diamond, and it is rare my friends. Diamonds will almost always have some inclusions and that is totally okay because generally, for us normal people, a lot of these clarity characteristics can’t be seen without magnification anyways. These are called eye-clean diamonds and I think that is ultimately the main goal when deciding on your clarity. The grading scale ranges from Flawless (so, so perfect) to I3, which is a very obviously heavily included stone. 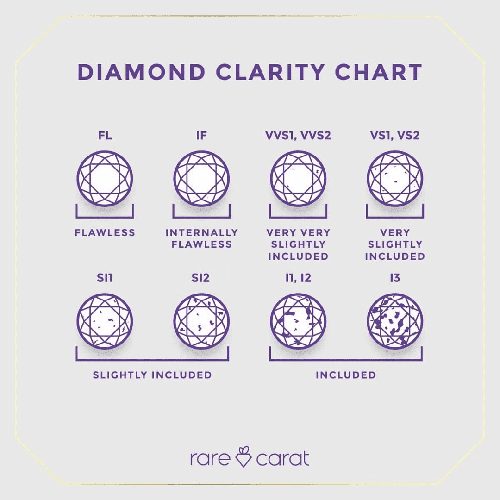 On the clarity grading scale, clarity characteristics will usually become eye-visible around SI1, which means anything above that should appear clean (and clean is what we want). Be aware though, some SI1 grades might have visible inclusions and some might not so you will want to see the diamond first before committing!

There isn’t a whole lot to be said about carat weight since it is quite literally just the weight of the diamond. If your priority is size, you can go lower on color or clarity to free up some of the budget. Princess cuts are beneficial in that they can be less expensive but still appear larger than other shapes, like the round. This means you will be getting more carat weight for your money or paying the same weight price for a larger looking diamond (we call that a win-win fam). Also, and in general, the price differences will increase the most drastically when crossing into the “golden number” weights… for instance- .97 ct vs 1.00 ct, 1.47 vs 1.50, etc. So, if you aren’t like die hard set on a certain weight, these sizes look so close to being the same that it might be something worth considering. Side note - a bonus of any fancy shape is it will be more cost effective per carat than a round cut simply because round cuts are in higher demand. Higher demand = higher prices. 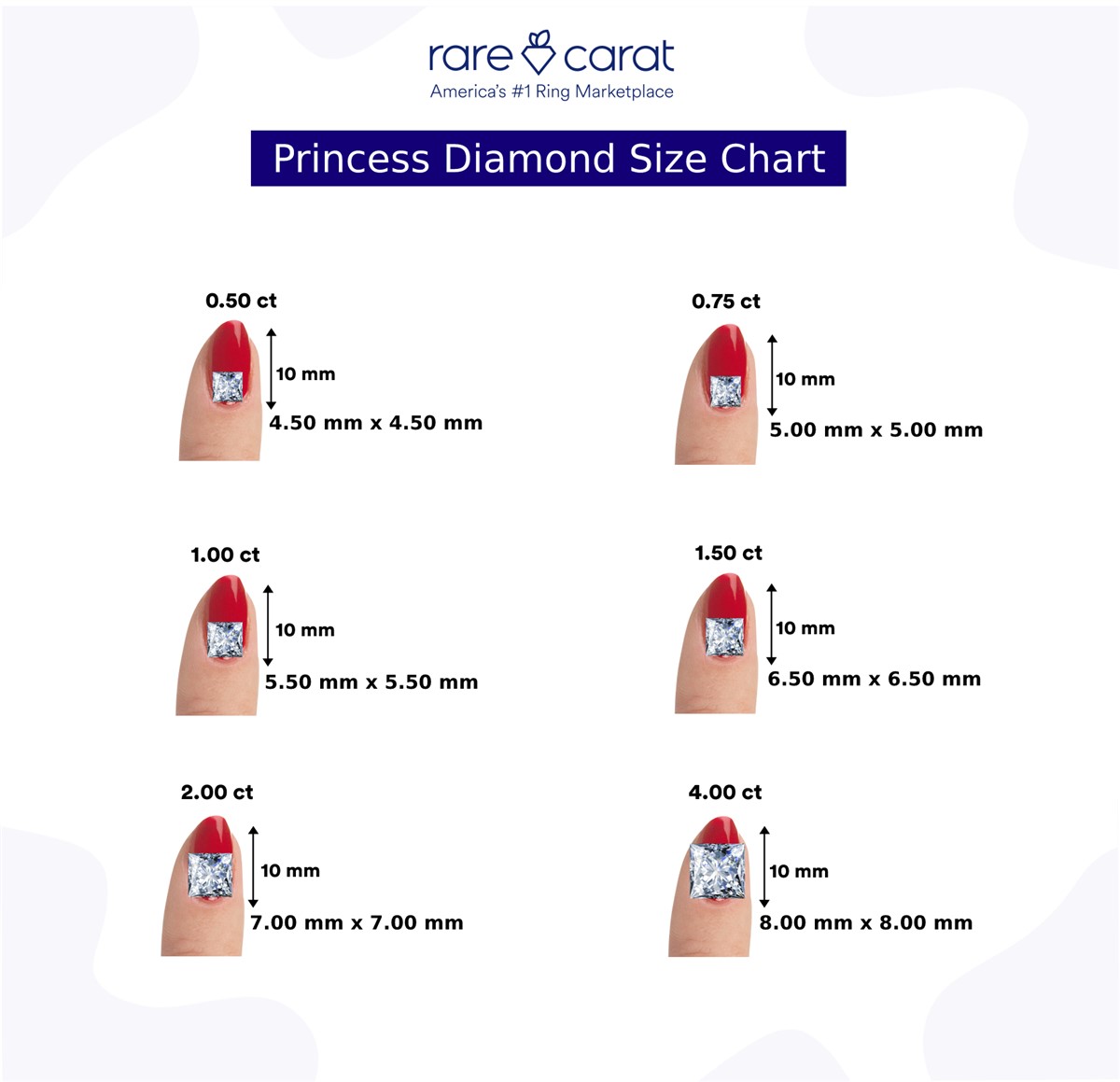 There are a couple of other random things I would like to mention about the princess cut before we finish up. Because this cut is a square, it has 4 sharp corners (yup, that was math). These corners will be super vulnerable to chipping and damage so a setting that protects them might be a good idea. Something like a channel setting, bezel setting, or halo setting would work because they all enclose the entire diamond. A prong setting is also a good option since the prongs come up and over the corners. You are spending a lot of money on this diamond so make sure you take steps to protect it! 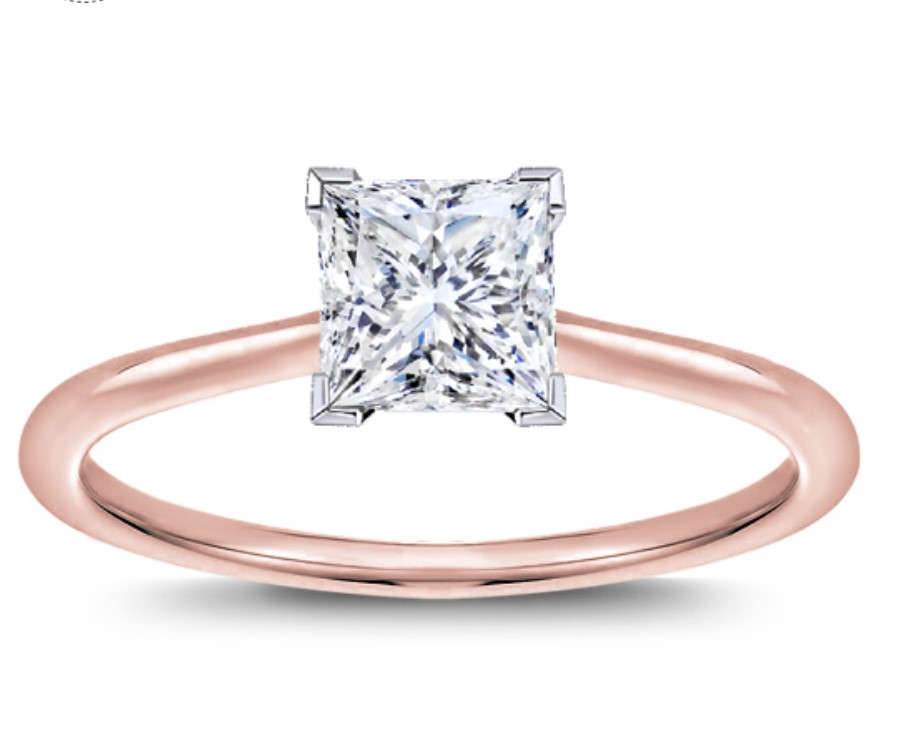 The princess cut is also really fantastic for a three or five stone engagement ring (if you’re into that). The straight sides line up nicely, and it can be very visually appealing for us OCD people. Plus, more diamonds always feel like a win in life. 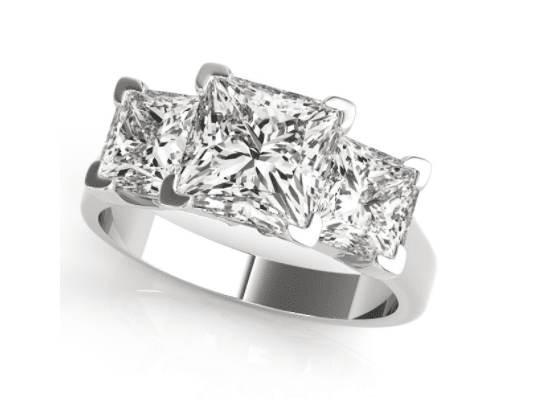 Out of everything we have discussed here, I strongly feel the most important aspect when choosing a princess cut diamond is going to be the symmetry. If your square is lopsided or uneven, there really is no coming back from that. Other than symmetry, this is a beautiful choice in diamond shape. While popularity will probably continue in cycles, like most fashionable things, the style itself is modern and clean and that’s why we love it. Remember, the princess cut is not just for princesses, although if the shoe (or diamond) fits - wear it!